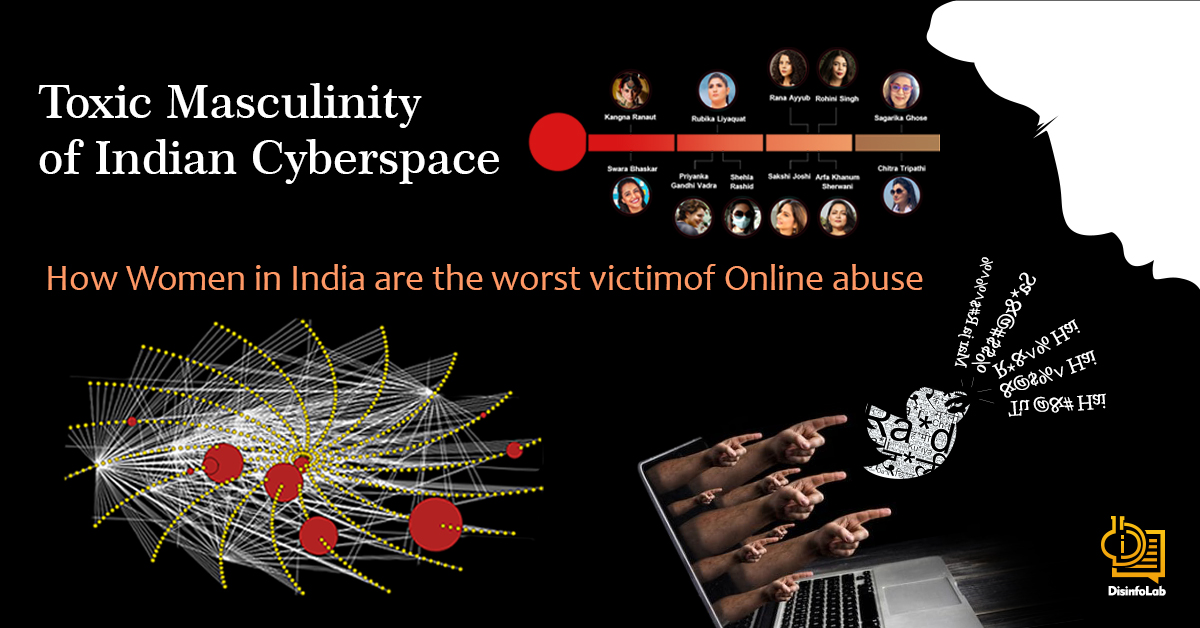 1 year ago 27 Min Read
share
Contents
Executive SummarySample and MethodologyNadir of Abuse: The Cusswords used in abusing women leave nothing for imaginationCelebrities with Opinion are Obvious Targets: the Stronger the Opinion more the AbuseUgly Truth: an Enabling Political Environment for AbusersBetrayal of Religion?Role of Fake Accounts:Cleaning the Mess: Status of Corrective MeasuresLest We Should Forget…

As the internet becomes an increasingly important part of human existence and a critical space for marginalized populations to make their voices heard, a woman’s inability to feel safe online is an impediment to her freedom and to her basic human rights. Online violence against women is essentially an extension of the offline violence directed at women owning to their gender- it targets their sexuality, reduces them to sexual objects and reinforces gender stereotypes.

Online trolling of women was declared a human rights abuse by Amnesty International in the year 2018 but unfortunately with the advent of the internet came keyboard warriors who without being in the forefront pours out their frustration through abuses upon those who constitute half the population in the world’s largest democracy.

India ranks 133 out of 167 countries in George Town Women, Peace and Security Index which clearly indicates how India is at war with its girls and women. Analyzing violent behaviour, particularly violence directed towards women in Indian cyberspace through the lens of virtuous violence – which posits that the perpetration of the problem stems from a self-righteous and morally grounded position, and perpetrators tend to believe that violence is the correct moral recourse to answer the problem at hand. Thus, we researched and tried to analyze the type of violence faced by Indian women in the online regime and who are the real culprits behind it.

An array of terms has been used to describe and discuss gender-based online harassment, including cyberbullying, stalking, hate speech, abusive language, sexual innuendo-filled obscenities, smear campaigns and doxing. Hate speech, for instance, is a singular instance of a full spectrum of antisocial online behavior deployed against women. Gendered online hate speech can be understood as when a perpetrator weaponized the gender of the victim to threaten, abuse or debase their identity.

For our research, we created a database of Twitter profiles of 236 prominent women from different domains like Actors, Activists, Lawyers, Singers, Sportswomen, Businesswomen, Journalists and Social media celebrities or influencers. We collected the replies to their tweets between November 2020 to Mid-January 2021, analyzed it and the results were alarming.

The network of abusive handles in the context of prominent women handles under the study. The network establishes the interconnection between various abusers. An interesting thing to observe was that most of these abusers were dedicated to their respective targets, and only rarely abused others, who share the views of their targets.

Nadir of Abuse: The Cusswords used in abusing women leave nothing for imagination

Attached below is the Word cloud of the most used abusive words which women have received on online platforms. It is interesting to note over here that how women have been objectified by the social police.

Note: It was a dilemma whether we should publish the word cloud. However, we decided to publish as these are ubiquitous on social media platforms.

Celebrities with Opinion are Obvious Targets: the Stronger the Opinion more the Abuse

This was in one sentence our conclusion from the data we collected. Women who are vocal about various social in justices consistently draw more flak. Bollywood celebrities Kangana Ranaut and Swara Bhaskar are right at the top in the target list of the abusers, despite belonging to two different ideologies and political leanings. Both are known for fearlessly voicing their opinions and are vocal about their thought-process. While it is also a fact that most of women celebrities are victim of online harassment, the differences between socially/politically active celebrities and others is evident.

Our research finds that Kangana and Swara, in particular, have been abused in every 10 minutes. This ratio increases substantially to each minute once their posts get uploaded.

No political establishment has been particularly kind to women in India, despite the Constitution allowing ample protection against gendered abuse. While the political dispensation was never very supportive of women in general, their role as enabler of such abuse was a revelation. It was shocking, though may not be surprising, to found that even eminent Indian politicians and accounts of National parties were found in the following list of the abusers, which clearly indicates how fragile and double-faced our political system is.
Below is an instance of the same.

While the women, in general, faced such barrage, there were differences along with political views and religion of such women. A case in point – Rubika Liyaquat, Shweta Singh, Chitra Tripathi, Romana Isar Khan are known for their pro-government stance. However, carefully analyzing the data-set of abusers of these four women, we noticed that Rubika and Romana have been accused more by social media handles appear to be belonging to the same religious community. The criticisms seem to be emanating from some sense of ‘betrayal’ by some community members of certain ‘unspoken community code’. This also underscores a worrying trend of herd thinking. In a polarized society, the differences are not only emerging along the political lines but also along with the beliefs, in a way that the notion that a particular group should hold views along certain lines is getting solidified. And once again, the women from minority community are the biggest victims, ironically though, by the hands of the same minority community member.

It is an established fact that sense of anonymity tends to elicit socially unacceptable behaviour, and online anonymity is the even bigger enabler. Therefore, as expected, a significant number of abuser accounts were found to be anonymous. To assess their social media standing, we took the followers data of the abusers and found that nearly 44.6% of accounts had only 0-10 followers.

Among these the majority of the handles were solely allocated for the task of abusing as nothing else could be found on their profiles. In the list given below, we could clearly see that a good number of these trolls had only 15 tweets in total, ever. A good example is @Satinde91045504– which has only tweeted 8 times, and every time it has open its mouth, it has spitted venom, so to speak.

This also seems to indicate that these handles are being run by certain people only for the purpose of abusing. Likewise, 12% of the accounts do not even have their profile pictures on their accounts. They are devoted just for the task of online bullying, demeaning and defaming women who take their stance strongly.

The online abuse and violence violates Terms & Condition of all Social Media Platforms, and yet the Platforms have struggled to keep the space clean, despite banning Trump’s handle. We could not determine the extent of corrective measures the platforms like Twitter and Facebook are able to take, but the outcome leaves way much to desire. In the duration of the research, we found that merely 2% of the accounts have been suspended amongst the abusers’ dataset.

However, this was clearly not enough. Moreover, contrary to our expectations, we found that these accounts have reasonably decent longevity. Nearly 35% of accounts were active for more than a year- e.g. handles which were created before 2019 and are still into dedicated abusing.

Most of the social media platforms also provide mechanism for ‘reporting’ such handles, but it seems that our collective conscience is not stirred enough to take our time off the TL and make the effort to report these handles. Apparently, this has made the abusers more daring. However, one silver lining, if it could be called so, was that the posts by abusers did not in general generate much engagements. They were generally not liked or re-tweeted or commented upon by anyone. Whether it is due to aversion to such posts, or the same online inertia that prevents us from reporting is hard to say.

Lest We Should Forget…

A strong woman stands up for herself but a stronger woman stands up for everyone else. Thus, online platforms must reaffirm its commitment in providing a ‘safe space’ to women from all arena. Until then, the silencing effect of abuse will continue to stand in the way of women’s right to expression and equality. 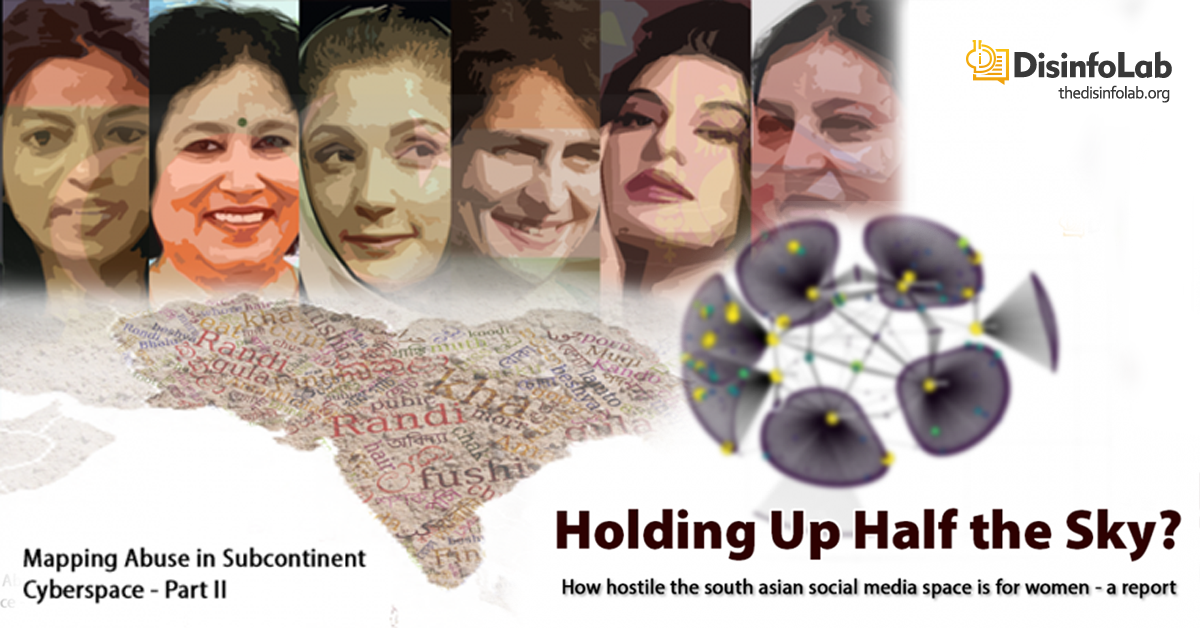