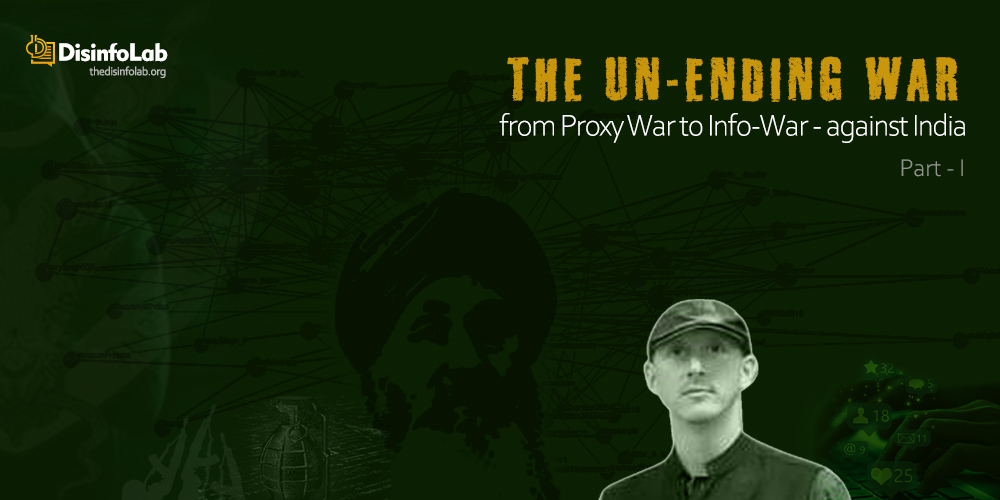 2. Info-War/psy-war is one of the fanciest discussion topics. Yet, the consciousness about its gravity and impact in India doesn’t seem to be registering even with major stake-holders. Our attempt was to try and map one such network, and bring to light its scale of operations. Though we did expect it to be an elaborate design against India, their reach and depth within India and the impunity with which it was operating shocked us.

3. The  story goes far back into the past. During the turmoil of 1980s, a hitherto an unknown Khalistani Bhajan Singh Bhinder @Iqbal Choudhary appears on scene. He claimed his origins from Malaysia, and was operating from the US. He was essentially funding the terror network for carrying out large-scale violence in various cities in India through another Terrorist Lal Singh with the help of Pakistan’s ISI. Indian escaped the the attack by a whisker when Lal Singh got arrested from Dadar railway station. Bhinder was eventually also put in India’s Black-list till 2011.

4. The attacks were part of a larger conspiracy called K-2 (Kahsmir – Khalistan) which was hatched in Lahore under the patronage of Amir ul Azeem, the then Secretary of Jamaat –e-Islami, and being supported by several Pakistani establishment players including Choudhary Altaf Hussain, eventually Governor of Punjab (Pakistan) and uncle of present S&T Minister of Pakistan Fawad Chaudhary.

5. At the same time, while in US, Bhinder and his gang was also involved in a major trans-national drug trafficking network, and a DVD piracy network. In order to fund their drug network, they managed to take control of one of the most prominent Gurudwaras in the US (Fremont Gurudwara), after a bloody fight within Gurdwara. Fremont receives millions of dollars in contribution from devotees every year.

6. All this while Bhinder has also been trying to procure weapons to be sent to India via Pakistan. His quest of arms almost got him in the police net in the US. An investigation by DEA Special Agent Tim Lum reveals that Bhinder was looking for massive fire power to be sent to India. The deal however failed to materialize, as Bhinder got suspicious about the Agent. It was a close call for Bhinder.

7. With change of millennium Bhinder also changed his methods. In the early 2000, after the efforts to send weapons to India failed, and with new media and online platforms mushrooming, Bhinder (or the masterminds behind him) decided to shift focus towards launching info-war against India. To this end he plans to set up flimsy organization and scouts for a suitable ‘white face’, who could be used as face for the info-war operations.

8. By 2006-7 Bhinder finds a young Christian Missionary Pieter Freidrich, who seemed to have a decent oratory and writing skill but was still wanting in terms of economic means. Pieter was even willing to work as security guard, and hence the offer to become an ‘expert-activist’ would have been quite lucrative to refuse. Pieter came on board and finds a new role as an anti-Gandhi crusader.

9. To provide credibility to Pieter, a number of institutions and organizations were formed in the US – prominent being Organization for Indian Minorities (OFMI) in 2007. OFMI was purportedly set up for the cause of minorities in India –but had no Indian or even Indian-origin minority in it. Pieter was also given prominent space in another similar organization Sikh Information Center (SIC), which was working for Khalistani agenda.

10. To further boost Pieter’ credibility, a number of books are published in his name – all published through a company registered by Bhinder in 2007. The same year OFMI was set up and Pieter is brought to public notice. The design seemed almost a replica of what was happening in phase I, except the weapon was replaced by information.

11. However, it seems their early attempts were not very smooth. In a rather peculiar manner, Pieter changes 3-4 names during this time, writing books in various aliases, and also appearing at various events in different names. In one stance, in a letter to an organization (targeting India) Pieter has used more than one name as representative of different organizations just to add credibility to it.

12. The modus operandi was standard: set some book published in his name, few articles in compliant online ‘news portals’. Create some social media avatars and start connecting with potential amplifiers. In the process build credibility and then hijack the narrative of every possible genuine ground protest to suite their agenda. And they have singular agenda – to tarnish India’s standing in the world.

13. Bhinder – Pieter duo first started their tirade against Mahatma Gandhi. The objective was to malign the image of non-violence associated with India. It is not surprising that the names of the duo along with OFMI keeps coming up with every vandalism of Gandhi’s statue in the US.

14. However, in order to dent India’s image and kill its peaceful non-violent image, it was necessary to provide an alternative narrative. Hence, in addition to targeting Gandhi, they decided to paint India as ‘fascist state’. In this enterprise, they also got not a small helping hand from several people inside India, who found a common cause due for various reasons.

15. This elaborate design and planning that is underway since 2007 at least was driven by singular motive – to target India’s interest. This is tried to be accomplished in 4 major ways:

16. However, as noted, despite the elaborate planning, it was hard for them to get audience and credibility in Indian media space, unless endorsed and amplified by Indian intellectuals. In a remarkable feat, Pieter managed to hook up a significant following amongst India’s major influencers.

17. The brilliance of this operation was not merely the planning and execution –the makers also wanted to make it self-sustainable. Pieter had started a fund raising for his ‘cause’, and claims to have gotten close to $ 30 k (out of a $ 50 k target). Though it has to be seen how much money was actually raised from public. But most of all, the fund raising adds further to the credibility, and whatever loose changes come from actual public would be an added bonus.

18. The beauty of the project is also evident from the list of media and social media amplifiers, which includes who’s who amongst Indian social media luminaries. Not surprisingly, a lion’s share in OFMI and Pieter’s promotion come from Pakistan, from Cabinet Minister to Influencers and Media. Pakistani Minister Fawad Choudhary is one of the prominent promoter, whose uncle Choudhary Sr. had played significant role in orchestrating the terror attacks in India.

19. These series of events have been around everyone for long but yet major stakeholders failed to notice this shift from proxy war to info-war/psy-war Our attempt was to try & map this network, we did expect a elaborate design but the reach & depth of the planning was shocking.

While some of the OFMI and Pieter’s promoters may have been in collusion with him, others might have been fooled by their projections – A White Expert and a U.S. based Organization. but it would be fair to assume that they would in general be aware about the nature and extent of info warfare in present time, particularly against India. that they fell for this charade is an irony of epic proportion

ABOUT US
We are a passionate group of people who have pledged to dedicate ourselves to present you with nothing but the true facts and the agenda lying under the deepest segments of fake news
Contact us: [email protected]
© All Copyrights Reserved- DisinfoLab
Support